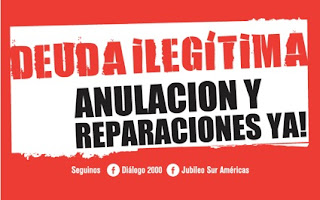 Speculative funds seeking to guarantee their usurious profits at our expense are celebrating. The government is preparing a new "offer" for debt restructuring, which will cede to them even more of the sovereignty and wealth that the Argentine people need now, more than ever, so as to ensure their health, water, employment and other fundamental rights. At the same time, the government is continuing to make interest payments to the IMF and other institutional and local lenders, and is preparing to negotiate new agreements with the Fund and the Paris Club. The eternal debt...

As Dialogue 2000-Jubilee South Argentina, we again express the conviction that other paths could be taken. The best proposal is to immediately suspend all payments, investigate the existing battery of allegations of fraudulent, illegitimate, illegal, and odious debt, and  stop paying what the people do not owe.  Specially at this time of deep economic, social and environmental crisis that is exacerbated by the coronavirus pandemic; a situation that spotlights and magnifies the genocidal consequences of the speculative, extractive, exploitative, patriarchal, racist, and repressive model that is guaranteed by the capitalist system of perpetual debt.

In the same spirit, we joined together with some 600 organizations and popular leaders from around the country and the world, to issue, this week, a new declaration promoted by the Open Call for the Suspension of Payments and Investigation of the Debt: The people have the right to know what it is about, so as not to pay what they don't owe. "We don't accept that the only option is to pay", the statement underscores. As people gathered on May 25th, more than 200 years ago, today we also demand our right to be heard and to know just what the debt is all about, so as to be protagonists in the struggle against present-day colonialism and the domination exercised through an illegitimate debt.

Adolfo Pérez Esquivel, Nobel Peace Prize laureate and president of Dialogue 2000, called for strengthening resistance against the debt swindle on Wednesday, in the public conference held by the Open Call to present the new declaration. While emphasizing that the people were never consulted nor benefited by the alleged debt whose payment, nonetheless, is imposed on them, he recalled that "not every law is just and unjust laws - of which the history of the debt is full - have to be resisted until they are changed. Otherwise, the debt will remain a vicious circle, a new form of slavery."

Nora Cortiñas, Mother of Plaza de Mayo-Founders' Line and member of Dialogue 2000, also insisted, at the same conference, on the urgency of suspending payments and investigating all of the debt, as well as the need to repatriate the capital flight that the debt had enabled and to sanction those responsible.  "There are many countries, such as Germany, that did not pay the debts claimed of them. The president would go down in history if he made a dignified decision to seriously prioritize human rights and not pay what the people do not owe." She added that, "20 years after the landmark court ruling in the Olmos case, we will continue to demand a comprehensive audit of the entire debt, with citizen participation, so that we don´t pay what we don't owe.  The only debt is with the people."

(Translation from the original in Spanish)