IMF Out! Enough of Austerity and "Structural Reforms" 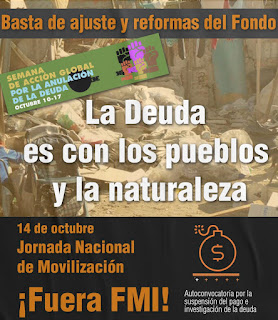 The Open Assembly for the Suspension of Payment and Investigation of the Debt, in view of the continuity of the illegitimate, illegal and odious Argentine public debt, the search for a new agreement with the International Monetary Fund and the arrival of a mission to Argentina for that purpose, declares the following and invites all popular movements and organisations to express themselves accordingly:

We reject the agreement with the IMF and the attempts to renegotiate it. An agreement is based on austerity policies and "structural reforms". Its objective is to impose labour flexibility, progress in the privatisation of education and health, the extension of the retirement age and the reduction of salaries, and other anti-worker and anti-popular measures. The pressures to reduce the fiscal deficit deepen extractive expansion and ecological devastation and limit the possibilities of implementing policies in health, education, social welfare, housing and other public investments that are especially necessary at this time of crisis.

The guarantee that the adjustment will be implemented is the direct surveillance of the IMF envoys, overriding every possible margin of action and autonomy and guaranteeing the perpetuity of the debt system in favour of concentrated capital. For all this, we understand that it is essential to build a broad movement for repudiation from the grassroots.

We reaffirm and emphasise that the public debt fraud must be investigated, the illegitimate and illegal debt repudiated and annulled, those guilty of these crimes sanctioned and the necessary restitution and reparation assured. In the same way that justice is demanded in the face of State Terrorism, the principle of Memory, Truth and Justice must be applied to capitalist criminals who carryout Economic Terrorism, condemning the people to misery and want in order to offer the wealth of the Nation to foreign interests and powers, oppressing workers and their families in exploitation and squalid living conditions, and destroying Mother Nature.

The Grievance Forums that are being held every #Monday Against Debt, within the framework of the Popular Judgment of Debt and the IMF, promoted by this Assembly, are demonstrating with concrete and forceful data the direct correlation of public debt and IMF and other International Financial Institutions’policies with the suffering and want of our people, the violation of our food, energy, water, territorial and financial sovereignty, the deterioration in health matters, in education, in habitat, in the life of indigenous peoples, women, sexual dissidents and other sections of the population who suffer discrimination, racism and marginalization, and in the future of our children, youth and the elderly. They also clearly show who is responsible and how it would be possible to ensure a dignified and sovereign life in harmony with nature for everyone.

The current agreements with the lenders, together with the negotiation of a new agreement with the IMF and the permanent renewal of the debt stock with the other international financial institutions, without prior investigation, give continuity to the State policy that has been executed by all its powers (Executive, Legislative and Judicial) since the time of the dictatorship. A great opportunity was once again lost to take a decisive step on the road to independence from the colonising system of perpetual usurious indebtedness, at a time when the whole world is in a great crisis marked by the coronavirus pandemic, the care crisis and the acceleration of the ecological and climate emergency.

At the same time, thanks to the government's condescending attitude and the consolidation of impunity, national and international usurers were allowed to avoid a domino effect that at the regional and global level could have contributed to the healthy and invigorating destabilisation of this perverse mechanism of predation and pillage. Instead, on the contrary, not only are they intended to legitimise what are clearly criminal contracts and conditions, but also to reformulate the Collective Action Clauses in their favour, further strengthening an international legality favourable to lenders, once again ignoring the primacy of the obligations of every State and company in the matter of human rights as well as the right of each State to take sovereign and unilateral measures in situations of necessity and force majeure.

The International Monetary Fund has nothing to do in Argentina; it must be actively repudiated. It is a vulture that, in order to colonise nations, still violates its own statutes, as happened with the loan granted to Argentina during the Macri government, to finance its campaign and benefit its allies. More than continuing to pay interest and capital to the IMF - even if postponed for later -, from Argentina we demand that the IMF leave, that it return what it has unfairly collected and provide reparations for the crimes perpetrated.

In this sense, and within the framework of the Global Week of Action for Debt Cancellation (October 10 to 17), in parallel to the IMF, World Bank and G20 Finance Ministers´ meetings, we call on popular movements and organisations to express their repudiation and join in the actions to take place.

In particular, we invite you to add your signatures to the "Open Letter to Governments and International Institutions and Lenders", which will be presented on October 14 to demand the unconditional cancellation of illegitimate and odious debts, among other emergency measures. We call to promote together a Mobilisation Day that same October 14th, through virtual activities, open radios and other types of street actions everywhere, respecting the prevention measures in force in the current pandemic situation. In the City of Buenos Aires we will gather at 12 noon in front of the local offices of the IMF (Paraguay 1178), with an open radio and press conference.

No to the Fund's "Structural Reforms"!

Suspension of Payment and Investigation of the Debt!

The Debt is with the People and Nature, not with the IMF and the lenders!

Translation from the original in Spanish courtesy of Joyce Cowan of the UK-Argentine Solidarity Committee.