Buenos Aires, 14/10/2020 - As G20 Finance Ministers gathered virtually to once again decide to continue "business as usual", popular movements and organizations in 5 Argentine cities took to the streets - with COVID19 prevention measures in place - to express their repudiation of ongoing negotiations and a new agreement between Argentina and the IMF.  Mobilizations took place in the capital city of Buenos Aires, outside local IMF offices, and in Córdoba, Jujuy, Rosario and Tucumán. "IMF Out! Enough of the Fund´s Austerity and "Structural Reforms" and "The Debt is with the People and Nature, not the IMF or the lenders" were the principal calls behind the mobilizations.

The actions, convened by the Open Assembly for the Suspension of Payment and Investigation of the Debt, formed part as well of the Global Week of Action for Debt Cancellation, supported this year by groups in nearly 100 countries worldwide.  An Open Letter calling on Governments, International Institutions and Lenders to Cancel the Debt both as an emergency response to the severe social, sanitary and ecological emergencies now facing South peoples around the world, as well as its inherent illegitimate and odious nature, was among the actions undertaken globally during the week.  Dialogue 2000 activist Beverly Keene, one of the coordinators of the Open Assembly, presented the Global Letter, with the signatures of more than 550 organizations worldwide, at the Buenos Aires rally. 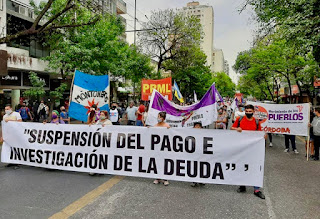 In the course of the week, the Open Assembly also realized its 12th "Grievances Forum", in which popular organizations from Haiti, Puerto Rico, El Salvador, Ecuador and Colombia filed their complaints against the Debt and the IMF, as part of the Popular Trial that has received complaints from scores of Argentine organizations since its start in late July. Health, Education, Work, Water, Extractives, Indigenous Peoples, Women, Retirees, Children and Youth are among the diverse areas about which the popular complaints have been filed against the impacts and consequences of the Debt and IMF/IFI policies.  The Popular Trial will continue through the month of November, with final Judgment expected around December 10th, marking the importance of national and global action to ensure that the Debt with the Rights of Peoples and Nature is given priority over continued payment of illegitimate and onerous debts.  The weekly Forums can be followed in Spanish every Monday at 5 pm (GMT-3), on Youtube: Autoconvocatoria Deuda.

Dialogue 2000 also participated in various actions as part of the Jubilee South/Americas network, one of the early conveners of the Global Week of Action.  On Monday, October 12th, Beverly spoke on the situation of the debt regionally, during the online Forum and Launch of the video clip "Enough of Eternal Debts!". Nora Cortiñas, Mother of May Square-Founders´ Line and another Dialogue 2000 activist, shared her testimony during the opening round of the online Assembly of Creditor Peoples, organized by JS/Américas.